My daughter has been a part of an intense descipleship program called The Sisterhood of the traveling Armor. This program is in 3 month increments and she just finished the first 3 months. As part of this program she was required to write an essay about something that had happened in her life, she chose to write about the tornado in Joplin MO May 22, 2011. I knew my daughter was a talented writer, she brought tears to my eyes and warmth to my heart as she described the night of the tornado and her personal experience in the aftermath. I am putting it on my blog for you to read, it is my hope that you appreciate it as much as I did.

Like a gentle stream that clears the leaves from its stones, is a child’s tears as they clear the dust and grime from his cheeks in uncertain lines. Like a savage animal protecting her dead from others, is a mother standing in the streets clutching her dead child to her chest. Like the dark and estranged caves of the wilderness, is the man suffocating under the rubble, doubtful to be discovered in time. Like nature losing her home to man, is man now losing his home to nature.
Hours after the incredible tragedy, I saw these things. People wandered the streets, children cried for their parents, mothers refused to believe that breath had indeed escaped their child. Hundreds waited in the collapsed rubble and debris, praying for relief, hoping to be found. The scarred and mutilated frames of buildings and homes that had been such a key part in our community now stand in sacred memory of the lives and livelihoods that have perished.
There is no good way to begin such an essay as this, no good place to set my pen into motion. I feel a small amount of infidelity in knowing

that as the storm raged on, I was drinking coffee with family having just finished a rained out ride on my horse. I didn’t believe it at first. How could I? On my way home from Welch that night, I heard of the devastation for the first time on the radio. With a strange, but iron calm I came home to my worried parents and sat to watch the weather channel which was portraying a live scene of a sight near the demised hospital. A strong and determined need to be there to help in some way overcame my being and apparently my father’s as well. Soon, my father, brother, and I were loaded down with anything we thought we might need and on our way. Long, winding back roads eventually led us into the heart of hell. 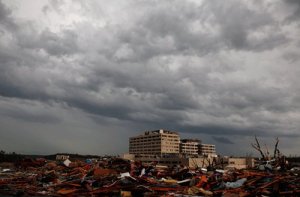 We quickly took to foot when near all the roads proved blocked with down power lines. One main road we needed to cross took about a mile of walking in the opposite direction to finally find a safe crossing point. It was on our way doubling back that we came upon about fifty or so nursing home patients, of whom the majority were wheelchair bound, along the side of the road. Their home was flooding due to broken water lines and their roof was close to collapsing. They where evacuating to a military office across the street, but the disabled patients could not move up the water overrun roads or the mud sunken yards to get to a safe crossing place. We spent some time with them trying to find a solution, but circumstance forced us on.
I do not know what became of the nursing home patients or if they ever reached their destination. The thought pains me now. It was not long after that I found myself subjected to a sight that mirrored a night time version of what I had seen on the T.V. earlier. In fact I was standing in the place of

the anchor from the weather channel. In front of me was the smoky, forsaken hospital. Gas was strong in the air and the wind whipped fabric from upper level curtains where the outer walls had been completely torn out. The sight set my will to steel and my emotions disassociated from my body. There was work to be done.
Across from the hospital, emergency medical tents had been set up and I could see volunteers coming out of the hospital through the E.R. side doors, laden down with supplies to take to the tents. This is where I spent my night. Flashlight in hand, I entered through the shattered glass doors and took up with a group of strangers and a nurse with word of pediatric supplies needed quickly. This set off hours of trudging through the flooded hallways of the eerie hospital.
Tiles from the ceiling littered the soggy floors, absorbing the water and creating a sludge that made the work of pushing laden carts of supplies twofold harder. It did not take long for exhaustion to set deep into my bones, but I decidedly ignored and pushed through it. Wires hung dangerously from the ceiling and strange red lights periodically blinked from hardly recognizable computer monitors. The whole place reeked of gas and blood and the awful water.
Typically I was always with someone in the black, desolate building, but there were times of estrangement amidst the flashlight lit halls. Always I could hear the distant sounds of workers in another hallway searching for similar items as myself, but occasionally the noise would cease and the red tinted water rather inspired paranoia. 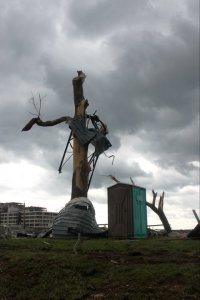 Throughout the night my feet sloshed and squished through the mess as my muscles strained to drag supplies through the broken doorway and then on across the street to the medical tents. When finally the hospital had given all the tents could hold and our job was exhausted. I left the hospital and found my father and brother and after a while longer, we headed home.
Once home, we all dragged our tired bodies into our rooms to remove our soiled clothes and then fell into our beds. The next few weeks held many more long hours towards the restoration of our great city. By: Kelly Rarick 2011

I have heard that some I hold very dear, are stating their reason for walking away from the Lord is because of all the hypocrisy in the church. Welllll this is interesting. Interesting that one who has known God’s love and mercy would walk away from it because someone else is a hypocrite. Interesting that one who has known God’s healing and grace would walk away from Him and all He sacrificed for their salvation, because someone else is a hypocrite. The lies of the enemy are powerful tools and lethal as well. I don’t know how anyone would be able to just walk away who has truly known God, but I have seen it happen and it has happened to one who is incredibly dear to me. I also think that the “I don’t serve God because of all the hypocrites” is a crock and a poor excuse. We are all hypocrites in one way or another. We all do and say things we regret and wish had not been said or done. We all pretend to be what we are not, wanting to impress others or blend in, whatever the case may be. There are no exceptions to this, we are all human and we are all going to make mistakes. If I were to base my relationship with God, my husband, my children, my friends etc…on how someone else behaves than I would have no relationships at all. Others hypocrisy is not the reason that you no longer believe my dear, it is your own hypocrisy that is standing in the way of your relationship or lack there of with God. I have no reason to believe that this precious person even reads my blog, but it by chance you do, I want you to know that I love you dearly and I pray for you everyday, even in my hypocrisy I have a relationship with God, and he hears your name called out in prayer. My relationship with God is not based on my goodness or abilities but on His goodness and ability to keep me even in my hypocrisy. As He does with all those who love and serve Him. I don’t think I am the hypocrite you were talking about, but it dosn’t matter who it is, what matters is that you are believing a lie and accepting less than the best for your life. The enemy has laid before you a banquet of rotting food and blinded your eyes so that you think it is wonderful. I pray for your eyes to be opened and your ears unstopped, for the truth to be revealed in your life and the lies exposed. God has a plan for your life that is wonderful and fulfilling, but He won’t make you live that life, you can stay in the dark and perish if that is what you insist on. But you don’t have to. You will always have the hypocrites around you, your choice is to live for God on earth among the hypocrites and spend eternity with Him in heaven or live for the devil and spend eternity with him in hell along with the “hypocrites” that were truly liars and cheats.

Bottom line is that you make your choices, not because of hypocrites but because that is what you want to do. Hypocrites are nothing more than an excuse to make you feel better about yourself and why you chose to walk away. I know I am being harsh, I know that I am offensive, I also know that it is time to call black black and white white. It is time to stop being so worried about offending and be worried about souls that are dying and going to a devils hell because we in the church are afraid to speak truth for fear of offending someone. I for one am tired of blending in and not making a scene for the sake of keeping peace. Hell is real and Heaven is real, God is real and the devil is real. Jesus died so that we can be saved from a very real devils hell, rejecting that gift, that sacrifice will not go down better with God if your reason for doing so was because there were just to many hypocrites in the church.

Holly’s performance was Friday, Saturday afternoon and Saturday night. It was Amazing! The whole group of dancers were annointed and did such a beautiful job! Here are some pics of her solo dances.